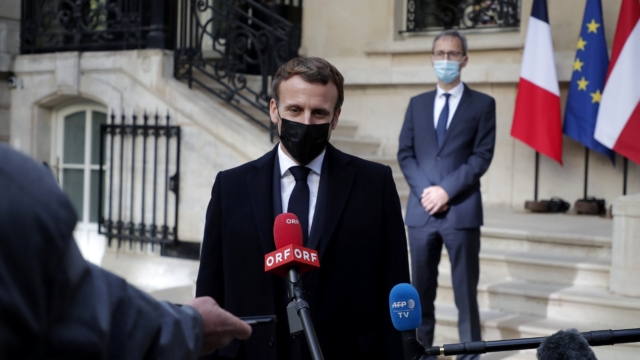 I am both a Muslim and a secularist. Does that sound implausible? It really isn’t

First they beheaded a teacher, a decent man who cared for his multiracial pupils. Then they slaughtered a church warden and worshippers in the Notre-Dame basilica in Nice. Then they killed and seriously injured citizens in Vienna. One far-right white extremist was shot dead after he threatened people in Avignon. By the time this article is published, there may be more shocking activities by Islamists and fascists hellbent on destabilising Europe and its foundational columns of democracy, freedom, universal human rights, gender equality and rule of law.

That is why the French President, Emmanuel Macron, uttered the emotive words: “This is our Europe.” Principled Western Muslims should side with him, for, whatever racists and jihadis claim, we belong here. Yes, Muslims face discrimination and hatred in France, across the EU and the UK. But would they choose to go back to their countries of origin, most of them “Islamic” nations, where economic prospects are grim and human and democratic rights are routinely crushed?

I am a Muslim and a secularist. Sounds implausible? It really isn’t. I am one of many around the world.

Secularism is not atheism. It’s simply the separation of state and faith and safeguarded citizenship for all. Until the late 70s, ex-colonies in the Middle, South and Far East were secular nations. Pakistan’s founding father, Muhammad Ali Jinnah, proudly created a secular, independent country. Today its leader Imran Khan – once a playboy of the Western world – proudly rules over an intolerant, fundamentalist Sunni nation which severely oppresses diverse Muslim sects, Christians and other minorities. Khan; Mohamad Mahathir, the ex-PM of Malaysia; and other “Islamic” leaders and mullahs have been turning European Muslims against the French state. It’s blatant, shameless, dastardly politicking over dead bodies.

Meanwhile India, once a secular state, is fast becoming an un-free, Hindu-controlled territory. As the renowned Indian lyricist Javed Akhtar recently rued: “Secularism, social justice, women empowerment all are important values and we grew up learning about these values. These values are part of our DNA and therefore, it pains us when we see these values are being undermined.”
US secularism has similarly been undermined by Christian fundamentalists. In both countries Muslims are the losers. No wonder Narendra Modi and Donald Trump are such good chums.

Of course, secular states can also turn inhumane, nativist, obscurantist and authoritarian. The Muslim Brotherhood in Egypt was replaced by an elected dictatorship which suppresses dissent and punishes pious Muslims. Bangladesh, though officially secular, privileges Muslims so those of other faiths and no faiths are, in effect, second-class citizens.

Twelve years ago, I co-founded British Muslims for Secular Democracy (BMSD) with Nasreen Rehman, a British-Pakistani academic and writer. We set it up because we were so shocked by the way some reactionary mosque leaders reviled the liberal Muslim film director Ismail Merchant after he died.

We are against an established state religion and believe Muslims are only answerable to Allah, not to self-styled faith controllers. BMSD is still going and has a lot of young supporters. Next week we publish a report on the inner lives of troubled young Muslims. Previously, we have campaigned against state-funded faith schools, the appointment of religious leaders to the Lords, parents who refuse to let their children do art or drama, gender segregation and Sharia family courts. There is nothing un-Islamic about what we do.

My hero and guide is Abdullahi Ahmed An-Na’im, a Sudanese-American Muslim scholar, reformist and activist. In his book, Islam and the Secular State, he advocates a secular state built on constitutionalism, human rights and universal citizenship. His finely honed arguments are incontrovertible.

An-Na’im asserts that religious and political authority stem from different sources and conflating them leads to confusion or worse. Furthermore, he maintains that a good secular state is more consistent with the best periods of Islamic history than modern “Islamic” states. Predictably, this fine thinker has been condemned by Muslim boneheads.

But they don’t own the present or future. In 2019, the Arab Barometer Research Network and the BBC carried out a large, in-depth study covering 10 countries. They found secularism is on the rise throughout the Middle East and North Africa.

Secular, European Muslims need to become bolder and better Muslims. We must honour the victims of jihadism and affirm our allegiance to religiously neutral governance. This is our Europe. Stand up for it. That is our duty, a duty we have shirked for far too long.

The full article can be found here:
https://inews.co.uk/opinion/macron-austria-viennna-terror-attack-muslim-secularism-747261

While the Government dithers, minorities are promoting Covid-19 vaccines in their own communities
28th January 2021
Search
Featured posts
Recent comments
Go to Top