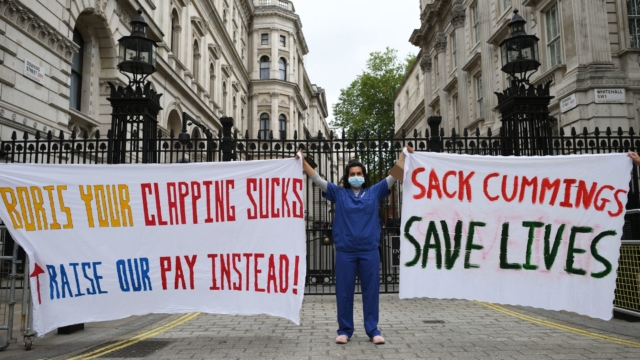 A third of Covid-19 intensive care patients are non-white – they are facing tremendous discrimination which is taking its toll on them mentally and physically.

On Monday evening, I was walking around the block – a lockdown routine – when this happened: a Somali woman in a purply hijab was on the other side of the road.

It was sunny and wild flowers were just starting to fade on the grassy verges. A man, coming the other way, shouted at her: “Fucking Muslim, fuck off, you carry corona.” She was on the phone and didn’t hear the abuse. I did and froze. He ran off.

Covid-19 has given racists more arsenal, more reasons to be hurtful to Britons of colour. Several people on the receiving end have sent me their stories. Parents say their children are being shunned or taunted; shop workers are accused of being virus-spreaders, a couple of black men were assaulted for being “germy” and letters have been delivered to Asian homes with racial slurs about “diseased weddings”. How can I begin to describe how these people feel? How I feel?

In England and Wales, 86 per cent of the population is white, 7.5 per cent of people are of Asian heritage, 3.3 per cent are black, 2.2 per cent are mixed ethnicity and 1 per cent belong to other minorities. According to the British Medical Association (BMA), a third of Covid-19 intensive care patients are non-white.

Professor Dinesh Bhugra, Emeritus Professor of Mental Health and Cultural Diversity at the Institute of Psychiatry, Psychology and Neuroscience at King’s College London, and Albert Persaud, co-founder at The Centre for Applied Research and Evaluation International Foundation, shared their concerns with me about how the Covid crisis was adding further pressures on mentally and physically susceptible minorities.

In one paper they write: “There is no doubt that minority ethnic groups and minorities in general have faced and continue to experience tremendous discrimination… Death rates among Bame populations are strikingly high… A number of explanations have been put forward, varying from poverty, overcrowding, high ethnic density, pre-existing chronic co-morbid conditions to other less known factors.”

Chand Nagpaul, the BMA council chair, is demanding an urgent inquiry into current health disparities between citizens of white and non-white backgrounds. He won’t get it.

The coming coronavirus surge will cause a disproportionate number of us to get gravely ill or to perish. Our mosque keeps announcing old and younger fatalities. Those at the frontline – in the NHS, transport and care services – are most at risk. Sixty per cent of health care workers who died – including 31 doctors – were of Bame background.

These figures are replicated in the care sector and other essential services. The nation fast forgets them. Instead, outrageously, all those who are deemed “foreign” are being subjected to blame, shame and excretory racism. Imagine the reactions of our media and politicians if Brits settled in Spain, say, were thus neglected and besmirched.

Asian health and care workers have described their traumas and anxieties to reporters from the Eastern Eye newspaper.

But I doubt our unelected leader and chief social disrupter, Dominic Cummings, would back the proposal. Public Health England has only produced tepid recommendations that have not been implemented. Dr Zubaida Haque, a member of Independent Sage, an independent group of scientists providing transparent advice during the Covid-19 crisis, said: “A good point to start is to ask the government: ‘What exactly have you done?’”

Because we haven’t seen anything that they’ve done. It does feel like the ball’s been kicked into the long grass with the recommendations because we’ve never seen nor heard anything and we’re on the verge of the second wave.At least five healthcare workers I know are off to New Zealand or Canada. Three have died. Racists don’t give a damn about us citizens of colour.

But the good people of this land should.

For as we try and cope with the pandemic, we all will increasingly depend on diverse, professional strangers, including that spiteful rotter on the street.

The full article can be found here:
https://inews.co.uk/opinion/black-and-ethnic-minority-people-dreading-second-covid-19-wave-656425

While the Government dithers, minorities are promoting Covid-19 vaccines in their own communities
28th January 2021
Search
Featured posts
Recent comments
Go to Top