Not card-carrying Catholic? Tell us what would go on your card instead

You are here:
Uncategorized

A Muslim, a humanist and an Anglican gave us their equivalent of the card printed up for Catholics. Over to you 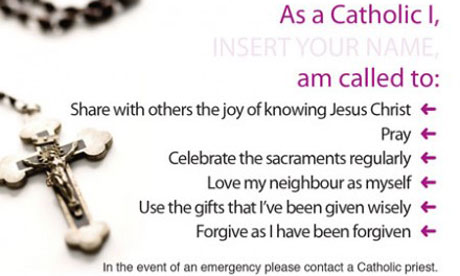 As a Catholic, I am called to:
• Share with others the joy of knowing Jesus Christ
• Pray
• Celebrate the sacraments regularly
• Love my neighbour as myself
• Use the gifts that I have been given wisely
• Forgive as I have been forgiven

But what about the rest of us? A Comment is free Belief inquiry produced cards for Anglicans, Muslims and humanists.

At a press conference in February 1964, boxing champion Muhammad Ali was asked: “Are you a card-carrying Muslim?” It was obvious that the reporters were only after one piece of information: whether he was a member of the Nation of Islam or not. Ali replied, “What does that mean, card-carrying Muslim? I’m decent. I don’t smoke, I don’t drink. I don’t sleep with your women. site analysis What’s the big deal?”

Forty-eight years on, and more people seem to understand what a card-carrying Muslim does not do, rather than what he or she actually does. In popular parlance, Muslims are often defined by their abstinence from a number of “everyday” indulgences, including bunk-ups and boozy nights out. This approach does a tremendous disservice to broader Islamic values such as tolerance, empathy and compassion. As the prophet Muhammad (peace be upon him) once said: “Fear Allah wherever you are, follow up an evil deed with a good deed, and meet with the people, interact with the people, with good manners.” If a membership card was ever printed for Muslims, this should be on it.

Andrew Copson, of the British Humanist Association, had a short and simple card:

As a humanist I try:
• To be rational, looking to science in an attempt to understand the universe
• To be ethical, acting in a way that puts human welfare at the centre of morality
• To recognise the dignity of every individual and treat them with respect
• To find meaning and fulfilment in this one life and help others to do the same
• In the event of the Second Coming, please administer medication for shock

Bishop Alan Wilson, noting that the Catholic card is something that all Christians should sign up to, wonders about a specifically Anglican version:

As an Anglican I [Insert your name] will:
• Try to be nice to people, especially important ones
• Sit in the back row at any liturgical function
• Not use the 1662 prayer book
• Give freely on condition as I get something back of equal value
• Grit my teeth and share the peace
• In the event of an emergency try calling 999

So, what would you put on your card?